Frontier of the Mind: 1930 Alumna Remembers
Author
Dec 9 2014 3:04 PM
Have you ever noticed the collection of haunting, primitive paintings in the west wing hallway of the Lower School building? Because the paintings often provoke questions about the artist, this seemed the perfect spot to tell the story of Phyllis Jane Luman Metal. The first thing you need to know is that she was put on a train from Rock Spring, Wyoming, in 1918, at the age of six, with a note pinned to her coat directing her to be taken to Rowland Hall.

Have you ever noticed the collection of haunting, primitive paintings in the west wing hallway of the Lower School building? Because the paintings often provoke questions about the artist, this seemed the perfect spot to tell the story of Phyllis Jane Luman Metal. The first thing you need to know is that she was put on a train in Rock Spring, Wyoming, in 1918, at the age of six, with a note pinned to her coat directing her to be taken to Rowland Hall.

Phyllis Jane Luman of Pinedale, Wyoming, became a Rowland Hall boarder at the age of six in 1918. She was the homesick yet feisty daughter of a Phillips Exeter Academy-educated cowboy and a Rowland Hall-educated city girl. In 1993, over a century after her grandmother Jeanette Sneddon attended the fledgling Rowland Hall in the basement of St. Mark's Cathedral, a 74-year-old Phyllis Luman Metal struck up a prolific correspondence with then new Head of School Alan Sparrow. It was a time during which she wrote about and painted her childhood memories in a cathartic attempt to reconcile her conflicting feelings about being sent away from her beloved ranch home to a boarding school in Salt Lake City. Although many of the memories she shared were almost nakedly sad, from the perspective of her later years she wrote, "Rowland Hall today evolved out of what I know, and what my mother, aunts, and grandmother knew. It is a part of Salt Lake and frontier history, which molded me day by day and finally years later I realized what had taken place. My mother found ranch culture barbaric and did her best to keep me from it. But now the ranch girl has come out of this old woman." In her lifetime, Ms. Metal gained notoriety as a feminist Western writer, publishing her own memories and contributing to the anthology Leaning Into the Wind: Women Write from the Heart of the West. She created sculpture and paintings, many that she contributed to the school, the Buffalo Bill Historical Center in Sheridan, Wyoming, and various other museums and institutions. She married twice and mothered four daughters of her own, and was one of six distinguished women featured in an award winning documentary entitled, "Acting Our Age."

Here you find just a few of Ms. Metal's memories taken from descriptions she pasted on the backs of her Rowland Hall canvasses. They may transport you to her ranch and to a boarding school in the heart of the West...and back again.

"My father, Kenneth James Luman, nicknamed Kay, graduated from Phillips Exeter when he was 19. He had just passed his college boards for Yale. Every fall Grandpa Luman made him go on the beef drive to Opal before he left for Exeter because he thought it was foolish to get such an education when he could teach him all that was necessary about livestock. Grandpa had four ranches on the lower Green River; one at Cora, one at Green River Lake, the Wells Place, and one at Kendall, plus 90,000 acres on the old Spanish Grand near Albuquerque. So that summer when my dad was 19 and eager to go to Yale to become a lawyer, Grandpa Abner Luman was struck by lightening and father, being the oldest, had to take over his outfit, running 20,000 head of cattle. When I was around three or four, I would ride with my dad on the front of his saddle, and he would say, 'Hang on tight, Peanuts.' When I was five I got my first pony, Cheivo, a little black pacer, and then I could ride alongside him."

"When I was six and ready for the first grade, my mother and father decided I should begin Rowland Hall in Salt Lake City, where my grandmother, mother, and three aunts had gone before. My parents wanted me to get a good education away from the frontier society of ranch folk. My mother was a well brought up 'city girl' and my father realized how hard ranch life was for her. So in our Pierce Arrow touring car, a wedding present from my grandfather who was known as the 'Cattle King of Green River,' we made the two-day journey to Rock Springs, our railroad point. I was put on the train and the porter was tipped to watch out for me. A note was pinned on my dress saying Phyllis Jane Luman was going to Salt Lake City. I protested leaving my family, my cat Bimbo Pushpaws, and my horse, Cheivo, but I was sent anyway. On the trip to Salt Lake I kept saying to myself, "I am a big girl now;' the homesickness hit me later. I was met at the Salt Lake train station by a tall lady who took me by the hand and called me her 'new little charge."

"My parents had hired a senior named Gwendolyn McReynolds to look out for me. She explained that we made every move by bells...rising bell, breakfast bell, clean rooms bell, and chapel bell, school begins bell, after school sports bell, study hall bell, get ready for dinner bell, dinner bell, study hall bell, and lights out bell. We went into dinner in the dining room in order of our seniority; headmistress, followed by teachers, then seniors, and on down to me, the only little girl. That year, I brought up the tail of the line and felt very small indeed."

"My world of Rowland Hall was so self-contained. Our life was the boarding life and our horizon was the edge of the campus...so different from my summer ranch life where there were no rules, I was completely free, and on the mesa I could look up to the distant mountain and to the horizon on all other sides."

"I carry the ranch inside me. I can close my eyes and see every sticky weed around our house, the gopher holes, the path to the coalhouse and the privy. And I can feel my feet on the path as I run barefoot from our house to the corrals wedged against the cottonwoods that line the river. Could there have been any other kind of childhood? There would have been no frontier in my mind, no wide open space that led on and on."

Phyllis Lumen Metal passed away in 2001, in Berkeley, California. We feel very fortunate to have her memories. This article was written for the Spring 2005 Rowland Hall REVIEW. 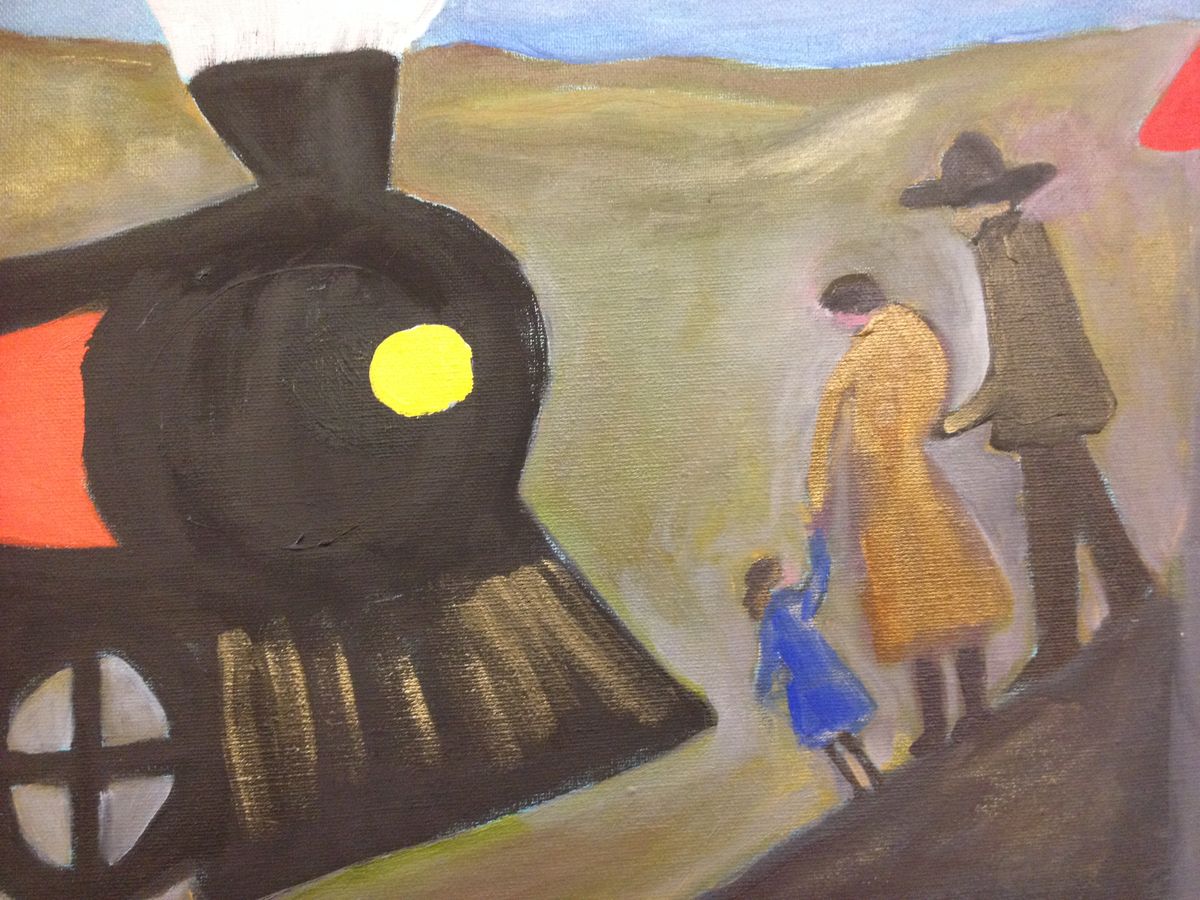