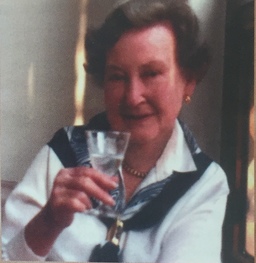 Meet Eleanor Wasson: A Woman Who Lit Fires
n/a
Dec 5 2014 11:18 AM
Ten years ago, Eleanor Wasson '26, reflected on her time at Rowland Hall. Three years later, she died at the age of 100. Her words about our school here are republished from the 2005 Rowland Hall Spring REVIEW and her 2008 obituary is reprinted from the Santa Cruz Mercury. She was a fascinating, well educated woman and the obituary -- an incomplete summary of a large presence -- is well worth reading. Ms. Wasson, her individuality, her passion, her depth, and commitment to helping her fellow human beings, we believe, live on and continue to represent the spirit of our school.

Ten years ago, Eleanor Wasson '26, reflected on her time at Rowland Hall. Three years later, she died at the age of 100. Her words about our school here are republished from the 2005 Rowland Hall Spring REVIEW and her 2008 obituary is reprinted from the Santa Cruz Mercury. She was a fascinating, well educated woman and the obituary -- an incomplete summary of a large presence -- is well worth reading. Ms. Wasson, her individuality, her passion, her depth, and commitment to helping her fellow human beings, we believe, live on and continue to represent the spirit of our school.

The year of my graduation from Rowland Hall, 1926, was a long way back, but memories of my four high school years are still vivid. Nine of us stood atop the steps of St. Mark's Cathedral in white caps and gowns carrying beautiful red roses. The memories are vivid because they were happy and productive years. We shred, we learned, we were all friends, no one was left behind.

I have always said that I learned more at Rowland Hall than I ever did in any of my college years. I am confident it was because each of us was recognized as individuals with different interests ,yet valued as part of a group interested in one another. Much was given and much was expected of us.

My major interest was art. Martha Springman, a talented and loving individual with a great sense of humor, was the teacher in that department. I remember doing much of the art work for our yearbook. My second favorite subject was English. We had a beautiful young teacher who demanded excellence and received it. Perhaps this is why I am so amazed today at the poor grammar we hear from people in high places, including our President! (George W. Bush was in office at the time.)

I recently visited the new Lower School and found it to be an exceptionally special place with children's paintings decorating the walls and beauty everywhere. I learned that conflict resolution is taught from the beginning. I met children with smiling faces and saw the puppets in Mr. Sparrow's office, with which he greets the students each morning. I wish that every child could have such a beginning for each day.

I shall be forever grateful to my parents for giving me the gift of Rowland Hall. While we didn't have Mr. Sparrow and his puppets, we did learn to appreciate the abilities of administrators and teachers to open the minds of young people so they could go beyond where they are with love and laughter.

Known for her great sense of adventure, spirit of volunteerism and her catchy book, "28,000 Martinis and Counting," Eleanor Wasson, a Santa Cruz resident for nearly two decades, died early Sunday.

"She had her last martini the night before last -- on Friday night," said daughter Joan Smith, who'd come to town a few weeks ago to take her mother home with her to Salt Lake City. "When you think about somebody who lives to be 100, you usually think about a little old lady with gray hair and somebody who can barely get by. That wasn't my mother."

If there were ever a woman who lit fires, inspired the apathetic, changed the courses of lives, talked politics and immersed herself in volunteer work, it was Wasson, who worked for three decades as the coordinator of Volunteer Services for UCLA, starting in the 1950s and retiring in the mid-1970s. So dedicated to the job, she ended up creating International Volunteer Education, an spin-off organization that taught those in other countries to recruit and train thousands of volunteers.

In Santa Cruz, Wasson was the impetus behind the formation of WomenRise for Global Peace, a local organization whose beginnings can be traced to just before the terrorist attacks of Sept. 11, 2001.

"She was certainly a remarkable woman and a remarkable friend to me," Santa Cruz Councilwoman Emily Reilly said Sunday. "She taught me to believe in myself, and she taught many, many, many other people about the overreaching and all-encompassing power of love. She has connections with people all over the world."

Among the names and numbers in her Rolodex? Al Gore and the Dalai Lama, according to her daughters.

The daughter of a multi-millionaire who worked alongside William Wrigley Jr. in 1893, selling sandwiches and gum at the Chicago World's Fair -- and the wife of George Wasson, an attorney who headed the legal department at 20th Century Fox in Hollywood -- Wasson lived what on the surface would appear to a charmed life in Beverly Hills But Wasson was always cognizant of the importance of giving back to the community, whether it was in Santa Cruz or the greater Los Angeles area, family and friends said.

Though she counted among friends movie stars such as Celeste Holm, Claudette Colbert, Betty White and Will Rogers, Wasson also had an acute sense of who she was: somebody who espoused feminism before it became trendy and a spiritual being who embraced the concept of reincarnation in the early 1930s -- not exactly a time when the topics were vogue.

"We are put on this Earth to learn a lesson so we can evolve," she said in a Sentinel interview in September 2004. "We are all made of energy, like Einstein said, and it does not go away. I do not believe in God as we know God, who sits on high in judgment. Rather, I believe there is a universal power of love and we are all part of it."

Wasson brought that attitude to Santa Cruz in 1989. She was always enthralled by the Santa Cruz Mountains, her family said. She was finally lured to the beauty of the Central Coast, though, by John Robbins, author of "Diet for a New America," which went on to become a Pulitzer Prize-winning book that sold over a million copies. She ended up moving to Santa Cruz to help Robbins with his environmental organization, EarthSave. She sold her house in Santa Monica Canyon and never looked back.

"This was a woman who truly walked with kings and common people and treated them equally and treated them all with the biggest heart," said Robbins, who once interviewed Wasson on the subject of old age for another one of his books -- "Healthy at 100." Robbins asked Wasson the secret to a long life. "She said, 'I think the secret is having loving parents. I never really appreciated that at first. I just took it for granted. But as I got older and met people and learned about their lives, I found out that not everybody has loving parents. Of course, I was shocked, but I've come to understand how lucky I was.'"

She also attributed her longevity to having plenty of friends, Robbins said. "And I must tell you," Robbins added, "she had thousands of friends. She befriended just about everybody she met. And it didn't matter what social structure or rank they belonged to. She didn't care."

But Wasson's life came to a halt fairly abruptly, although peacefully, her daughters said. She was diagnosed with cancer on Tuesday. She had a pain in her side and had let it go for about a month, but the pain got too intense last week, Smith said, adding that her mother was ultimately told she had pancreatic and liver cancer and probably wouldn't live beyond a month or two.

Yet her memories will live on -- along with her 164-page book, "28,000 Martinis and Counting," Smith said. "It's about her life," Smith said. "She lived to be 100 after all. She lived through the first automobile, the first airplane, all of the politics you can think of. The Depression. The World Wars. The Cold War. It's fun and wonderful."

And she lived it according to her principle, which can be found in the very last lines of her book -- "I continue to say that we all have power providing every action is motivated by love.

No funeral services were planned, friends of the family were invited to her home for martinis and champagne.

The late Mrs. Wasson's book, "28,000 Martinis and Counting," is available for check out from the Head's Assistant's office.