As Rowland Hall prepares to commemorate its 150th anniversary, we honor our longest-serving teacher, French Teacher and Department Chair, Doug Wortham. We celebrate his 40 years of service at the Upper School and the legendary contributions he has made to our school, students, and community.

As Rowland Hall prepares to commemorate its 150th anniversary, we honor our longest-serving teacher, French Teacher and Department Chair, Doug Wortham. We celebrate his 40 years of service at the Upper School and the legendary contributions he has made to our school, students, and community. 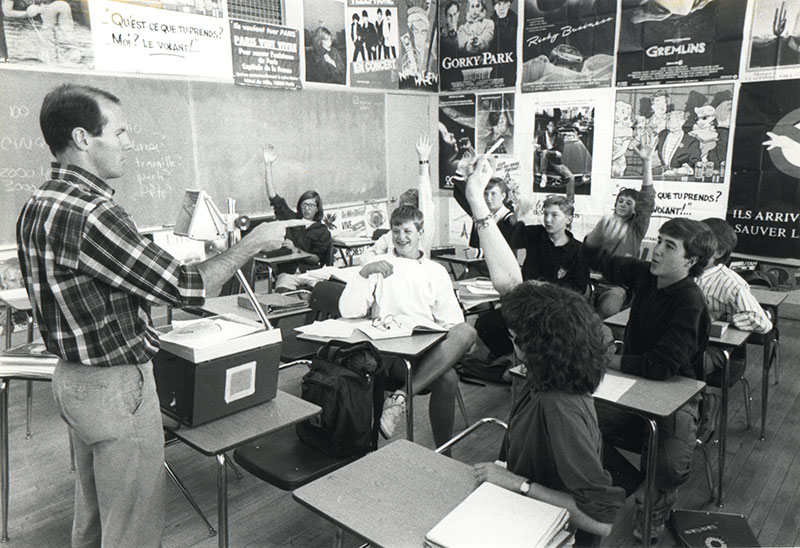 In 1978 with diploma fresh in hand, Mr. Wortham walked off the campus of Weber State University and onto Rowland Hall's Avenues campus, receiving an interview and personal tour from then-Headmaster William Purdy. That same day, they shook hands and signed the teaching contract that would last four decades and counting.

Mr. Wortham was hired to replace Patty Kimball, who had replaced Penny Dalrymple.

"Doug was a fantastic find and has been an epic teacher," Ms. Kimball said. "I taught for two years and Penny Dalrymple preceded me for two years. So the French program had little continuity until Doug arrived. Both my children loved his class."

Mr. Wortham said the first day he set foot on the "charming" Avenues campus he knew he was in a completely different world. "I was thrilled by it," he said. Growing up the eldest of nine children in Boise, Idaho, he felt unchallenged in school and frustrated by a narrow future, and longed for some way to leave home and afford an education.

Mr. Wortham did chores and paid his aunt a small amount for expenses while he studied French, German, and education. His advisor at Weber State, Oren Moffett, knew Headmaster Purdy and made the fortuitous connection. Mr. Wortham recalls overhearing two students walking out of the old gym on the Avenues campus reciting a simple French phrase.

"I heard the two girls say something to each other in French and I thought, 'That is remarkable,'" Mr. Wortham said. "I had a Mormon upbringing in Idaho and Ogden, and to be at an Episcopal school in Salt Lake City; I was just awestruck."

Mr. Wortham's French program at Rowland Hall has gained the reputation of being one of the most challenging and scholarly at the school. In 1988 he received the Sumner Faculty Award for excellence in teaching, and in 2005 he earned the Cary D. Jones Faculty Award for Service. But it didn't start out that way, he said.

"I was green behind the ears yet enthusiastic," Mr. Wortham said. "I quickly understood that the kids had immense potential, and the worst thing that had been done to me was that my teachers didn't even attempt to exploit my intellectual potential. So I realized straight away with Rowland Hall's small classes, willing students, and enthusiastic parents, I had room to really step it up."

He takes the description of a "college-preparatory school" seriously, so his scope and sequence are about preparing students to continue language studies in college. Rowland Hall's program is designed for students to advance through four years of a language at the Upper School, and "especially now, with a stronger Middle School language program," Mr. Wortham said students come to him with more skills.

"I can scaffold the four-year program in such a manner that the first two years are stocked with the grammar and the basics, peppered with French culture, and at the upper end add literature, visual art, and discuss big existential questions," Mr. Wortham said. "Why do I use the big topics of life, death, and religion? Because the students like it—it's motivating."

Mr. Wortham has also had a profound effect on Rowland Hall's social culture and was instrumental in helping Salt Lake City's public schools carve out a space for gay-straight alliance clubs in the late 1990s. He headed the Gay, Lesbian, and Straight Teachers' Alliance (GLSTA) and at a 1996 press conference with the Utah Human Rights Coalition eloquently explained the organization's mission: "GLSTA strives to assure that each member of every school community is valued and respected, regardless of sexual orientation." He was quoted in various publications, the most famous being Rolling Stone Magazine, where he spoke of the late 1990s as being more accepting to gay youth compared to when he was a young teenager in hiding.

Mr. Wortham said he couldn't have been the voice for public teachers who were being harassed and fired for their orientation, if not for "Rowland Hall's headmaster Alan Sparrow, the Board of Trustees, teachers, students, and parents who during that time provided a safe space for me and others so we could operate in the open when it came to the press." In 2014, Mr. Wortham and his partner of 35 years Nick Nero were one of the couples represented by lawyer Roberta Kaplan, who won the U.S. Supreme Court challenge of the Defense of Marriage Act filed in the 10th Circuit Court of Appeals.

Over the past 20 years, the political climate has shifted and Mr. Wortham said he has been able to step away from that political fight to contribute to his community in other ways—serving on the steering committee of the Salt Lake City Public Library's Marmalade Branch, coaching youth hockey, helping at-risk children at Washington Elementary School, and being on the board of the American Civil Liberties Union of Utah, to name a few.

Mr. Wortham currently teaches seven classes per day rather than the required five, leaving little energy for after-school activities. He's not complaining, though—he says he prefers to stay busy during the day. He views each day as an opportunity to keep his class new and fresh.

"I found this new form of literature called Twitterature that challenges students to tell a story in 140 characters," Mr. Wortham said, quickly accepting and expounding on the merits of the silly-sounding concept.

Mr. Wortham doesn't have a favorite story or a single formative moment from his time at Rowland Hall. "It's the lasting and personal relationships that make teaching a profoundly personal experience," he said. He finds it an especially profound experience as the children of past students begin to populate his classes. For example, pictured, sophomore Rowmarker Ned Friedman is currently taking Mr. Wortham's class. Ned's mother, Kitty (Northrop) Friedman '91, was also a Rowmarker and Mr. Wortham's student. The French teacher's junior class includes Sophie Hannah, the daughter of alumni Jennifer Bone '89 and Kelly Hannah '90.

The educator summarizes his love for the profession and desire to keep teaching long after his 40th anniversary: "Where else can you have a job where you can laugh every day and where, as an old person, you can mean anything at all to a young person?"