Spontaneously breaking out into a 1955 school song on the old Avenues Campus. Overhearing Rowmark Ski Academy co-founder Olle Larsson's distinctive guffaw and listening to one of his epic yarns. Dancing the night away on the McCarthey Campus, first in a flashmob, and later on stage with the headlining band. A record-breaking 1,200 community members attended Rowland Hall's Sesquicentennial Kickoff Weekend September 8-9 to celebrate—and make—school history through a series of unforgettable, hilarious, and heartwarming moments spread over six events.

The weekend opened with a victorious Girls Varsity Soccer game followed by the Alumni All-Class Reunion Friday night. Over 200 alums came from near and far—as far as Rome, in one case—to attend the reunion. Classmates seamlessly rekindled old friendships like it was only yesterday they raced down slopes for Rowmark, led peers down the chapel aisle as crucifers, or squeezed together for mom's photo of their matching Rowland Hall-St. Mark's uniform sweatshirts.

Loving the vintage sweatshirts at the alumni reunion! #rh150 #rhsm

"The old friendships are just ones that we step into so naturally after we haven't seen each other for a while" Sally Adams Prinster '60 said of her close-knit graduating class. "There's something reassuring about that, and something that's timeless."

Saturday morning at the old Avenues Campus, Sally's classmates—including sesquicentennial co-chair Nancy Borgenicht '60—formed an impromptu chorus to sing "Fair and True," a school song written in 1955 by the class of '56 for Rowland Hall's 75th anniversary. Later on, the '60 squad processed up and down the chapel aisle behind Sally, the former school crucifer, to reenact daily morning chapel services.

🎼"We'll return to you by and by, Rowland Hall, school that we love!" This morning's tours of our old Avenues Campus elicited lots of fond memories (and musical outbursts) from our alums! Thanks to @madeleinechoirschool for sharing their campus! #RH150

Lifer Rudi Riet '91 had a similarly memorable bonding experience with fellow skiers from the classes of '90, '91, and '92 at the Rowmark barbecue Saturday afternoon. "We've somehow survived all these years and still are able to talk and laugh as if we hadn't skipped a day," he said. "We're older and have a lot more perspective than we had before, which is a good thing, but we're friends for life."

Olle was in fine form over the weekend, according to Rudi. "He hasn't changed a bit," Rudi said. "He still is able to tell a rambling yarn that has so many 'one more things' that it puts Steve Jobs to shame."

Accordingly, a highlight for many guests involved connecting with old coaches and teachers.

"It's a small community here, but you don't always see these people all the time. So it was really great to reconnect, talk to teachers and parents, and see all the kids—the little kids—really enjoy it," Erica said. She relished a casual conversation over tacos with Maddie's fourth-grade teacher, Erika McCarthy. They chatted "not even about school—just, 'How are you?' and summer, and grandkids...it was really nice."

Rudi caught up with Bob Liget—his physical education teacher in Lower School and American history teacher in Upper School—and even the mother of one of his fellow skiers. Kristy Northrup McCoy, mom of Kitty Northrup Friedman '91, cheered at races alongside Rudi's parents. "With Rowmark, the parents were kind of like the little backbone that nobody spoke about but everybody recognized," Rudi said. Seeing Kristy prompted a "big old bear hug" and surfaced lots of good memories, he recalled.

Sally enjoyed facetime with the three daughters—Patricia "Patsy" Pearson Johnston '51, Ann Pearson Hutton '53, and Frances "Fannie" Pearson Crosier '56—of Henrietta "Aunt Henri" Pearson '25, who ran the boarding school. "She was my second mother. I loved her, and her three daughters were wonderful," said Sally, one of about 30 boarders at that time. "That was really fun for me."

Pre-2003 alumni who hadn't yet caught a glimpse of the completed McCarthey Campus savored the chance to explore Rowland Hall's new home. "From an aesthetic standpoint, that McCarthey and Steiner Campus land is a gem," Rudi said. "The view looking west over the city and that sunset on Saturday night—it was like, ok, this works."

The best view in town during the @rowlandhall150 celebration! @metromusicclub KILLED IT as always 🎶 #rowlandhall #rh150

Sally agreed: "I was just so impressed" with the campus architecture and landscaping, she said. And she heralded the beauty of the Wasatch Range, even when she and her husband drove from equally remarkable Grand Junction, Colorado. The alumna grew up in a ranching family in that neighboring state, where she initially went to a one-room school. Thanks to some careful family budgeting, Sally made the move to Salt Lake and attended our school for six years. "To be able to go to Rowland Hall and have the friendships that I had and the education that I had was a gift from my family," she said. 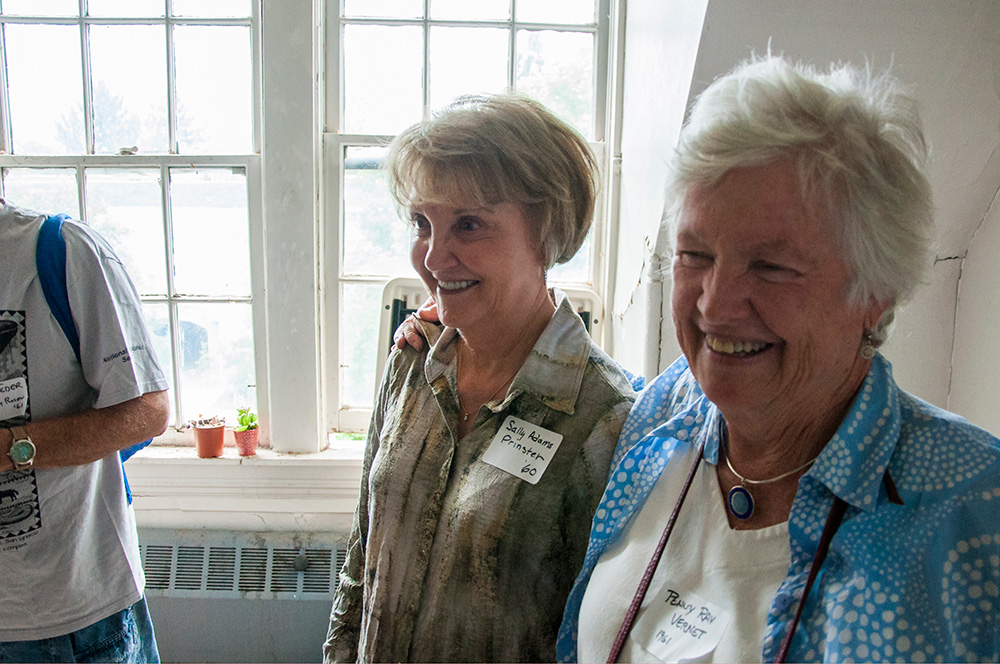 Sally added she was so pleased to see how Rowland Hall had evolved over the years. "It contributes so much to the community and provides such wonderful education," she said. "I'm sorry that my children and grandchildren haven't lived there to be able to go school at Rowland Hall."

If her kids had been Utahns, she said, they'd be there in a heartbeat. "I'd be like Nancy," she joked about her classmate, the sesquicentennial co-chair whose kids and grandkids are Winged Lions. "They'd all have to go there, no question, because of what it gave to me."

Rudi said the weekend showed Rowland Hall has a bright future, informed by its past. "You see so many multi-generational Rowland Hall families now," he said. "That, to me, is quite telling."

If Maddie and Owen Keil land in Salt Lake as adults, mom Erica hopes they'd one day send their kids to Rowland Hall. But if life brings the Keil kids elsewhere, Erica hopes they return to their alma mater. "It obviously means a lot—to a lot of different people and a lot of different generations," she said. "And I hope that as my kids go forward, it'll always hold a place in their hearts. I know it will. But I'll look forward to hearing them say, 'I'm going to my 20th reunion.'"