For Eric Oehlerich, Aspen Sulte, and Terri Kindness, service is a way of life. It's not hard to understand how their intense schedules, along with acute knowledge of the risks they face keep them focused on living each moment to its fullest.

Eric Oehlerich '94 decided he wanted to join the military after a seventh-grade math teacher in Montana suggested he wasn't smart enough to graduate from a service academy. "Anger is one of my best motivators," he admitted. However, after two decades of life as a Navy Seal, Eric's motivation and passion for service have far exceeded any desire to prove someone else wrong.

Eric graduated from the Naval Academy in 1999 and went straight to Basic Underwater Demolition (BUD) Seal training, a grueling program that pushes young service members to their limits. Out of 144 students who entered his training class, he was one of only 10 who finished. "It was a solid kick in the teeth...I loved it," he recalled. Since then, Eric has been deployed 12 times—first shortly after 9/11 and most recently in October—to Afghanistan, Pakistan, Yemen, and more. He has survived multiple brushes with death, and credited his ski racing background—including his time as a Rowmarker at Rowland Hall—with helping him develop the mental and physical stamina to stay alive in life-threatening situations. He also expressed gratitude toward the teachers and coaches who invested in him during his teenage years and gave him a "foundation for fair judgment and conduct across the globe." 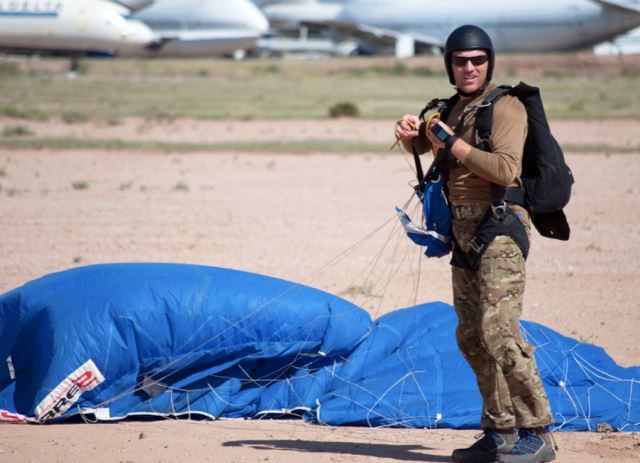 The Navy Seal acknowledged the sacrifices that go along with a life of service: "It comes with a steep price tag," the father of four said. "Over my career I've missed two births, and 90% of my anniversaries, birthdays, and major holidays have been celebrated via Skype or Facetime." He has a general idea where he will be training certain months of the year, but said his life can be "extraordinarily unpredictable." He's had to leave home without being able to tell his wife where he was going, how long he'd be gone, or when she might hear from him. "Anne is a true Spartan, and much tougher than I am," he said. "I respect what she shoulders to support this lifestyle."

Nevertheless, Eric is proud of his service—in particular, he mentioned rescuing hostages and bringing justice to people who have threatened the developed international community as some of his most memorable experiences. The alum, who holds an MS in defense analysis, now serves as a commanding officer in the Navy. In his current role, he said he leverages his extensive combat experience to devise the right circumstances for his men to be successful on the battlefield. Eric lamented the fact that on his deployments, he often sees the same faces he saw in 2001: there is "an extraordinary level of heavy lifting being done by a very few number of Americans," he said. His troops, though, are "one of the toughest bunches of men on the planet," and he's humbled to lead them.

Sydney "Aspen" Sulte '14 is currently in her final year at the Air Force Academy in Colorado and has committed her life to serving our country. Similar to Eric Oehlerich, her interest in the military began at a young age. Aspen grew up in Anchorage, Alaska, where she lived next to Joint Base Elmendorf Richardson and frequently saw F-22 fighter squadrons flying over her house. "The beauty of the F-22 Raptor led me to careers in the flying world," she said. "At the local airshows, I would talk to pilots about their experiences and the paths they took to get where they were. They all agreed on two things: do well in school, and if you want to fly, you need to go to the Air Force Academy."

With those goals in mind, Aspen came to Rowland Hall for eleventh and twelfth grades, and like Oehlerich, skied for Rowmark. She said she believes traveling with Rowmark instilled study habits and time-management skills she repeatedly draws on now. "I was pushed to succeed on the slopes and in the classroom. Rowland Hall prepared me for the academy and military life in a way that many of my current classmates were not able to do at their own schools." 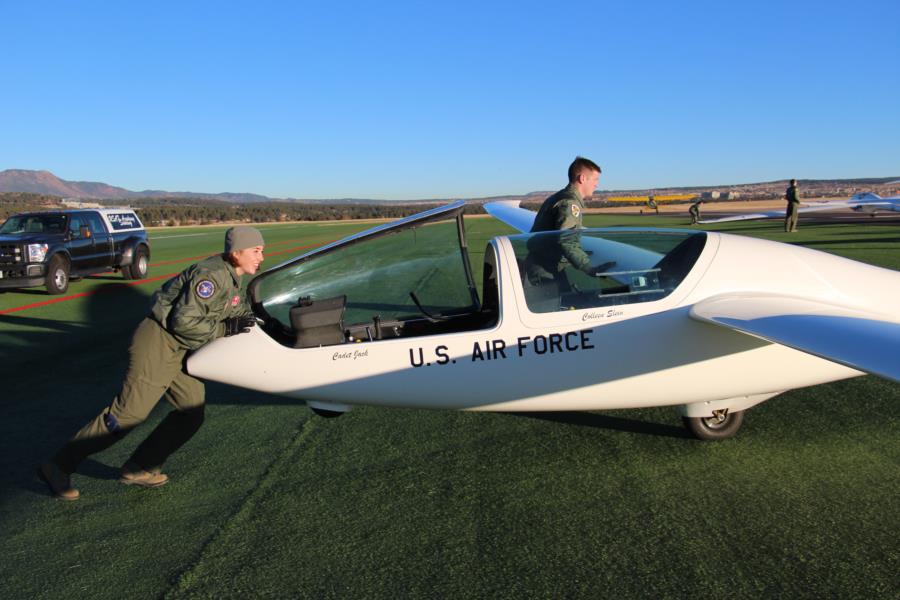 Aspen's schedule as a cadet is extremely demanding: she wakes up each day at 5 am and travels to the airfield for a mission brief at 6:30 am, followed by two hours of teaching freshmen how to fly in the TG-16, a high-performance glider. From 9:30 am to 2:30 pm she attends academic classes, then heads to physical training sessions or intramurals with her squadron until 5:30 pm. Aspen spends evenings handling squadron duties—morale events, training, paperwork, and discipline meetings—followed by lifting practice for the ski team. After all that, three to four hours of homework round out the day before she heads to bed and starts all over again the next morning.

Her comprehensive cadet training covers small-unit tactics, combat arms, sexual assault/suicide prevention, and character development. She said her experience at the academy is "mentally and physically challenging, but worth every second!" She once worked in a team to build and fly a real-life satellite, but she's proudest of her role as squadron commander. "There is nothing as challenging and rewarding as leading a team of 109 cadets over the course of a semester," she said. And Aspen's results are nothing to sneeze at. Under her leadership, her squadron's ranking jumped from 19th to fifth place out of 40, and their commandant recognized them for having the highest spirit in the wing.

Aspen plans to graduate in May 2018 and commission as a second lieutenant in the Air Force, stationed at one of four pilot-training bases. She dreams of flying fighter jets—specifically either the A-10 or F-22—and hopes to serve at least 20 years in the military.

Terri Kindness '92 also came to Rowland Hall to ski for Rowmark, but unlike Eric Oehlerich and Aspen Sulte, she followed an indirect path to military service. She earned her BFA from the University of Colorado, Boulder, in 1998. While living there, she realized if she worked for the Coast Guard she could live near the ocean, avoid working in a cubicle, and take part in fulfilling missions, such as search and rescue. So in January 2000 she went to Officer Candidate School (OCS) in New London, Connecticut, and by May, received her commission as ensign.

Terri wanted to—but initially couldn't—attend flight school after OCS. She didn't meet minimum anthropometric measurements, such as standing height and reach, and instead had to participate in fit testing in Florida, where she sat in aircraft to see how she would physically fit. That led to a waiver to fly two different types of training aircraft—the T-34 (Navy fixed wing) and TH-57 (Navy helicopter)—and she graduated from flight school in October 2001. 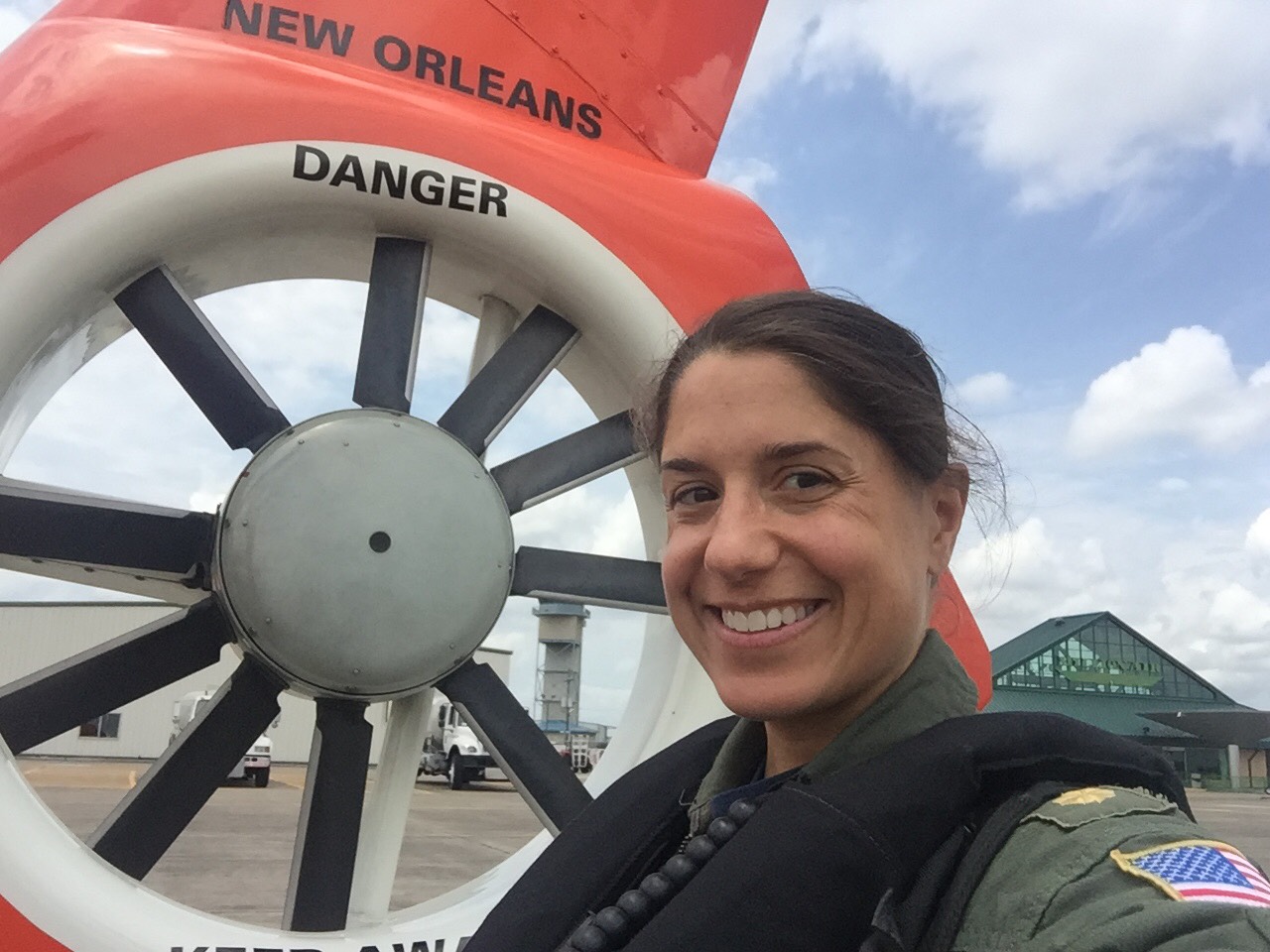 In the years since, Terri has served in Port Angeles, Washington; Barbers Point, Hawaii; Los Angeles; and Washington, DC. She became a first pilot within about a year, earned an upgrade to aircraft commander a year later, and then studied and became an aeronautical engineer. In the Coast Guard, aeronautical engineers do most of the test flights, supervise the hangar decks and maintenance personnel, and manage aircraft maintenance, she explained. Now an engineering officer at the Coast Guard Air Station in San Francisco, Terri oversees six MH-65D helicopters, a model referred to as "Dolphin." She flies once or twice a week, and each month stands one or two 24-hour duties—when pilots are on-call for urgent missions, such as search and rescue or law enforcement—in addition to her responsibilities managing aircraft and personnel.

Like Eric, Terri's service career has seen moments of great pride, significant sacrifice, and loss. She fondly recounted a fuel stop with her crew in Oshkosh, Wisconsin, where they met her grandparents for breakfast: "As we were about to leave, my grandma told one of my crew members to take care of me, and he responded that I was in charge and I was supposed to be taking care of them." She has also accumulated impressive search and rescue stories, including picking up a woman in labor off of Catalina Island and flying her back to the Long Beach airport through dense fog. Thankfully the woman didn't deliver the baby until she made it to an ambulance.

One of Terri's most difficult experiences was losing four crewmembers in a Hawaii helicopter crash. "The Coast Guard is a small service, and the aviation community even smaller," Terri said. "So when something like that happens, it affects everyone. As the engineering officer, I received the call early and was one of the first pilots on the recovery effort. That night, and the weeks and months that followed, were a challenge."

For Eric Oehlerich, Aspen Sulte, and Terri Kindness, service is a way of life. When they are not in training, on deployment, or otherwise working, they like to stay active—they run, canoe, rock climb, and of course, they still ski. It's not hard to understand how their intense schedules, along with acute knowledge of the risks they face keep them focused on living each moment to its fullest.

When asked what advice they would give to anyone considering a life in the military, their answers echoed one another: do your research, and consider the commitment you're making. Understand the mission of each branch of the service and what jobs might be available. Aspen emphasizes that people in the military need to be able to trust those to their left and right with their lives.

All three of these dedicated service members find deep fulfillment in the paths they've chosen. "I've found a treasure chest of reward in a life of service," Eric said. He encourages service outside the military, too: emergency response or the Peace Corps, for example. All these jobs require sacrifice, hard work, collaboration, and a deep desire to contribute to the greater good.

Those values are not new to members of the Rowland Hall community, where ethical education has been a pillar of our mission since the school's founding. In fact, our 1946 yearbook has a two-page spread honoring four young alumnae who served in World War II. The dedication to those young women remains equally true for Eric, Terri, and Aspen, and all other alumni who have served in the military. It reads:

Perhaps we fail to appreciate Rowland Hall. Do we ever stop to think just how much all of the guidance and advice given at our school can affect and better our lives in the future? The Rowland Hall graduates who have served our country during such a time of need are indeed a tribute to everything fine and wonderful that our school stands for.