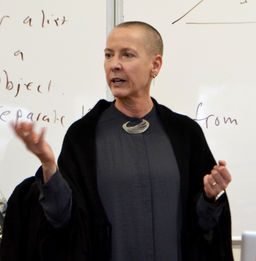 Katharine Coles, Utah's Poet Laureate from 2006 to 2012, Guggenheim Fellow, and a University of Utah 2017 Distinguished Professor, returned to Rowland Hall for the first time since graduating in 1977 to share her fifth published collection of poems, "The Earth Is Not Flat," written under the auspices of the U.S. National Science Foundation's Antarctic Artists and Writers Program.

Katharine Coles, Utah's Poet Laureate from 2006 to 2012, Guggenheim Fellow, and a University of Utah 2017 Distinguished Professor, returned to Rowland Hall for the first time since graduating in 1977 to share her fifth published collection of poems, The Earth Is Not Flat, written under the auspices of the U.S. National Science Foundation's Antarctic Artists and Writers Program.

Ms. Coles visited Joel Long's Upper School Creative Writing class in March as part of his guest writers series. She read her work aloud and thoughtfully answered students' questions about her writing process and how to approach overwhelming topics such as a month in the Antarctic.

"Katharine's poems bridge the gaps of poetry, philosophy, and science," Mr. Long said. "Her mind brings together such disparate disciplines with alertness and liveliness."

The poet, who comes from a family of scientists, said Rowland Hall helped instill "passionate and disciplined thinking" across all subjects and told the aspiring writers in Mr. Long's class that "in a very fundamental way, I see the projects of literature and the projects of science as being part of the same project—which is to understand reality and understand the world that we live in."

She said she remembers the strong encouragement she received from her Rowland Hall writing and English teacher, Helen Mulder. Ms. Coles laughed as she recalled it would be many years before her own mother would concede her success as a poet and resist the urge to end all conversations with, "You know you could always be an engineer." Ms. Coles said she still cherishes certain books given to her by Ms. Mulder—first-edition copies of Enormous Changes at the Last Minute by Grace Paley, and The Lost Pilot by James Tate. "Before she gave them to me, I didn't know English teachers could be cool," the alumna said.

Mr. Long's creative writing students were well-prepared for Ms. Coles. They had studied the guest author's work in class and were keenly interested in Ms. Coles' intersection of science and literature.

"Students are always inspired by visiting writers," Mr. Long said. "Often, a visiting writer nudges students in new directions in voice, form, and content. I've seen so many students flourish in new ways after we have our guests."

Neither Ms. Coles nor Mr. Long can say exactly why it's taken 40 years for Utah's poet laureate to return to her high school alma mater. Their friendship began 25 years ago with overlapping pursuits of advanced degrees in poetry at the University of Utah's acclaimed writing department. In February both were headliners at the Salt Lake City Art reading series (of which Mr. Long is president) presenting new work to an admiring audience dominated by Rowland Hall alumni, faculty, and friends.

One explanation is that Ms. Coles never stays put for very long—a proclivity set by her family history for adventure, scientific curiosity, and engagement. So while Mr. Long suggested, "It's probably my fault that Katherine hasn't been back," it's probably not.

In addition to her month in Antarctica, Ms. Coles was a featured guest of Poetry on the Move at the University of Canberra (Australia), and at the International Poetry Festival of Medellín (Colombia). She collaborates across art forms and disciplines, including visual arts and computer science, and is the co-principal investigator on the University of Utah's Poemage project, which develops software for analyzing and visualizing sonic relationships in poetry.

Ms. Coles credits some of her early love of language to her upbringing in the Episcopal Church. And although she is not religious, she said she is "committed to the knowledge that the world and the universe are larger than I am." In a 2016 interview with Doug Fabrizio on KUER's Radio West, Ms. Coles explained the relationship:

"I loved the magic in that one word becomes another word that sounds like it, the way which one thing through metaphor becomes another thing. I think poetry is related to magical incantation as well as religious incantation, and in my liturgy, you spoke the words and wine became blood, and bread became flesh."

Falling in love with the magical sound of language is one reason Mr. Long invites authors to read their work in class: "Hearing the voice of a writer is crucial; it helps develop the sense of the music of the literary voice, tuning the student's own voice."

Image, a leading literary journal whose mission is to engage with the religious traditions of Western culture, describes the allure of Ms. Coles' work: "In her elegant, approachable poems, Katharine Coles addresses subjects as diverse as the geology of Antarctica, eating dinner, mathematics, the decomposition of corpses, and biblical stories of creation and annunciation."

As students eagerly gathered around at the end of class, Ms. Coles promised a return visit to read from her sixth collection of poetry, Flight, published last year. Mr. Long said that meeting and connecting with published authors "gives students the insight that writers are just people who do the work of writing."

At this point in the academic year, many of Mr. Long's creative writing students are busy with the production of Tesserae, the Upper School's literary magazine. For the eighth consecutive year, the National Scholastic Press Association (NSPA) honored Tesserae with a prestigious All-American Award.

Other accolades for Tesserae include top ratings from the National Council of Teachers of English and the esteemed Pacemaker Award from the NSPA twice, with an additional finalist nomination.